My younger brother, Kip, is an excellent woodworker, but recently decided to sell off his PowerMatic table saw, jointer, planer, bandsaw etc.

He has had an old Mark V, unused for years. He is now learning how to work with the Shopsmith system, and I get to play big brother teacher.

I look forward to this experience (really!) and I will keep you posted, pros and cons.

He has already learned to love his Shopsmith bandsaw.

9-7-16: Kip has been using his Mark V for a few months now and he seems to be really enjoying it. He remarked that “I love that horizontal boring!” Not the first comment I expected, but that’s OK.

He is a talented guy and one of the first things he did was to build an indeed-outfeed system that will let him rip 4×8, ¾” hardboard. It is pretty amazing.The slotted pieces are his big “featherboard”. The rig takes about 10 minutes to set up and take down. 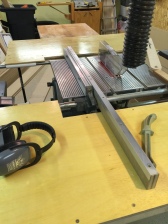 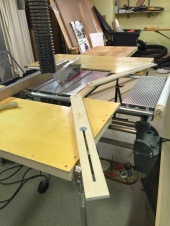 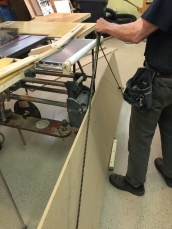 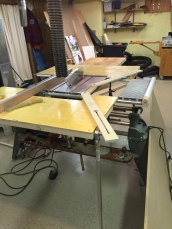 The ropes are part of a block and tackle for lifting the 90# panels onto the MarkV.

He says he also likes the conical sander (who doesn’t?) We used it for sharpening his jointer knives, and for dressing the edges of the hardboard. Beautiful!

9/20/16 Kip continues to reorganize his Shopsmith-based shop. I was concerned that he would have negative comments after owning individual tools for so long. But so far, he has had nothing but positive things to say.

He had started a project, adding wainscoating to his living room, then realized his shop needed reorganization and cleaning before he could continue. (Sound familiar?)

And he decided that before adding the wainscoating, he really should paint the living room. He removed the drapes before painting, then his wife decided new drapes would be in order. So paint, order new drapes, install new drapes, (borrow Little Giant ladder from his brother, me)…wash the windows…

Anyone have a story they would like to share about starting a small project that turned into something else?

Last week was my birthday, so my brother Kip took me, as a surprise, to a local wood slab supplier that I didn’t know about. It was fantastic!

The people their were super nice and helpful. They showed us slabs from 60″x24″x2″ huge slabs that were 12’x60″x4″ thick…walnut, maple, cherry, and many species I had never heard of.

Kip bought a slab 24″x72″x2″ thick claro walnut which brings me to this post and to Shopsmith.  He wants to make some musical instruments, and need to rip everything down to 6″ or less, and will then resew to ⅛” thick or less.

One thought on “My brother goes Shopsmith!”

This site uses Akismet to reduce spam. Learn how your comment data is processed.

The Art and Craft of Blogging

The latest news on WordPress.com and the WordPress community.